I’m beginning to think that predators have no shame.

Watching a large, powerful bear eat grass still strikes me as a little awkward. All those muscles, teeth and claws should be attacking something more worthy. It’s embarrassing really. 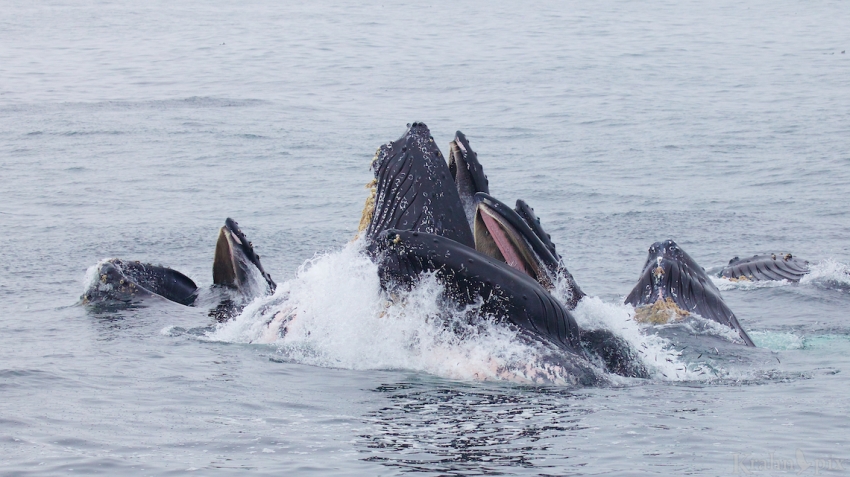 Notice the open whale mouth on the left side. It’s called lunge feeding – the concept makes me hungry.

But I topped that on a recent trip to California. We were looking for whales and were rewarded with humpbacks putting on an amazing show. They were diving, then rushing up to the surface as a group to swallow large quantities of prey in a process called lunge feeding. I will not soon forget the thrill of watching those huge creatures break the ocean surface in unison, time and again. Wow!

But what was their prey? Small anchovies. First of all I had no idea what an anchovie was except that it was some kind of vegetable that got sprinkled on pizza. It turns out I was entirely mistaken. It’s a little fish. I never saw that coming. In my defence, I still think anchovie sounds like a vegetable!

You would think that a humpback whale that ranges in length from 12–16 metres (39–52 ft) and weighs approximately 36,000 kilograms (79,000 lb) would be embarrassed catching these little guys. But no. There they are shamelessly avoiding the big fish and going after large quantities of anchovies.

To make matters worse, if they accidentally swallow a larger lunch like a sea lion, they will spit it out. I’m sure that makes quite the story for the sea lion to tell his friends over coffee.

I could have been more ashamed for the humpback whales but I was too mesmerized by the show these sea creatures put on. Maybe that was their shameless strategy.

This is rather close quarters for five whales to end up after lunge feeding but they all seemed to get along just fine.

I'm a self-declared cartoonist who can't draw. Just trying to create one smile at a time.