Something tells me that dandelion isn’t long for this world.

It’s fun to make assumptions. And much easier than waiting to get the facts. The only problem is that whenever I’ve assumed anything over the last while, it turned out to be wrong. I was sure my wife would be happy to clean up after I left things lying around …

Sometimes assumptions are not entirely wrong – the truth is just more complicated. That’s a shakey foundation to start if you’re trying to build a reliable foundation.

When you first looked at the photo above, it’s possible you assumed it was just another bear in a cage, or perhaps an impressive grizzly in captivity. If you follow this blog, you may have wondered what was going on. After all, Krahnpix is supposed to be all about wild animals and it is not particularly wild about zoo photos.

The truth? The photo is of a wild grizzly. The fence is on the side of a Banff National Park highway to keep wildlife off the road. There are a number of underground and overhead locations where animals can cross the road and there are no fences anywhere behind the bear. It is free to roam and even leave the massive park.

As I was taking a few shots of this gorgeous animal I got a little frustrated with all the wires. I began to wonder how the tables got turned and I managed to get behind the fence!

Now if you assumed this was a powerful grizzly that pretty much gets what it wants, that would likely be true. That was also one of a few good reasons to stay in my vehicle rather than walk up close, annoy the bear and assume there were no holes in the fence … 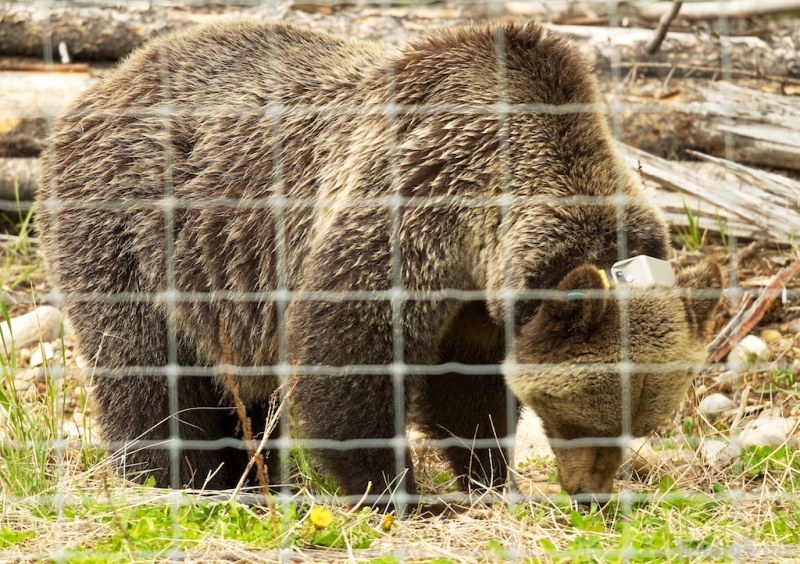