I should have learned to doubt the doubt.

After all the planning and hoping, yesterday we arrived in Dead Man’s Flats, Alberta. This is a bit of an accomplishment since I am probably the oldest kid alive – are we there yet? I was tired but hopeful for the photography opportunities that awaited. In uncharacteristic bombast I had told everyone I was going to see bears in the Rockies and of course all the rest of the wildlife.

Since the sun sets so late, we still had the opportunity to head into the back country before dark. That’s when the doubts began to creep in. We drove for a while and there were no bears, there weren’t even ducks in the ponds! What if we had come all this way and wouldn’t see wildlife? What if we would just drive around aimlessly with nothing to photograph?

I was reminded of C.S. Lewis who said that when he was an atheist he doubted and then became a christian and doubted. This doubt thing is completely irrational. How could I doubt the mountains?

As the mountain shadows started to lengthen, I looked up and there was the full moon just above a mountain ridge with clouds racing around it. The mountains all around were generously sprinkled with snow and as the sun settled in the west it started to cast pink hues in the clouds. Although we hadn’t see any wildlife at that point, I decided that I’d be OK and quit doubting.

Today I got to spend some quality time with Rocky Mountain Sheep and we saw some other animals that might possibly make it to this blog. Stay tuned. 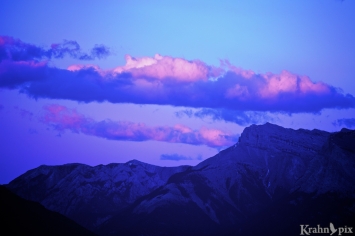