When I’m driving down the road and see two hawks together, I get a good feeling about what’s going to happen next! And in this case it most certainly did!

Krahnpix is all about wildlife and nature photos so it makes sense that the scenes I photograph should also be wild and natural – right? 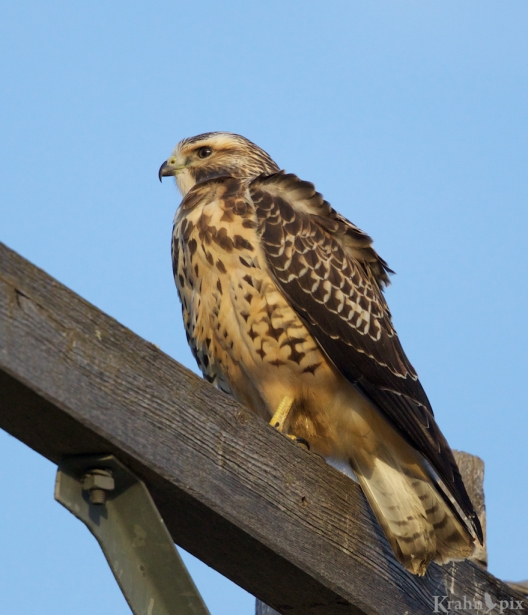 I had my assistant adjust the fan to ruffle some of the feathers … or maybe it was the wind. I can’t remember …

It’s easy for me to avoid zoos, pets and stuffed animals. On the other hand when I see an elk deep in a pristine national park, all the wild boxes quickly get checked. Still there are many times when the concept of wild gets complicated.

When a bear wanders around the ditch, I usually crop out the road  to make the photo look less civilized. That has, at times, given me pause. However, I know when I was at the scene it certainly felt wild and there was no doubt I was dealing with a wild animal. A road would just give it the wrong feel.

Last year I got another perspective on this subject during our trip to Yellowstone National Park. We watched a video about elk coming to a small tourist townsite called Mammoth to mate. Why would testosterone-loaded elk go to a tourist-infested location? Because they’ve always done that! It just so happens that humans liked the same location and put some buildings there a long time ago.

It’s fun to play around with angles. By adjusting the photo to make the bottom board straight, the post turned at an angle which made the hawk lean into its stare. I left the wire in the bottom right corner since I was amused that it was the same angle as the tail feathers.

So every fall there is this crazy scenario of bull elk walking on paved streets chasing female elk and the odd tourist around parked cars. It’s not exactly ideal for anyone. The point of the video was quite simple – wildlife adapts to human activity in a creative dance.

Back on the prairies, my purist tendencies for having no evidence of humans didn’t last long when I started photographing hawks. The most natural spot for them to perch is on round bales or fences so I quickly accepted those objects as part of my natural wild scenes.

This past summer I took all these images of hawks on power poles and cringed when I saw the photos. The scene didn’t seem wild or natural! And yet, it’s a perfectly natural place for a hawk to look for prey in a prairie setting.

I never tire of the intensity of that stare.

Krahnpix note. In case you are interested, I have added the uncropped versions of the two photos above so you could see what I started with.